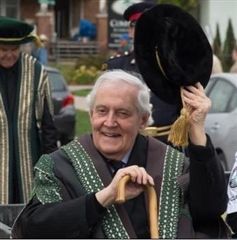 Old Boy of Distinction Award
The late Thomas H.B. Symons was a great Canadian educator and innovator who thrived on civic responsibility. He was teaching at the University of Toronto when a committee of Peterborough, Ont. citizens approached him about creating a university there. Symons became the founding president and vice-chancellor of Trent University and remained at the university until his retirement in 1994. At Trent, Symons began Canada's first university Indigenous studies program, created a Canadian Studies program and founded the groundbreaking Journal of Canadian Studies.
In addition to his dedication to Trent, Symons had a strong commitment to Canada and served the country, the province and its communities well. He was chair of the Ontario Human Rights Commission from 1975–78; chair of the board for the United World Colleges from 1980–86; and president of the Ontario Heritage Trust from 2010–2017. He helped establish a landmark Ontario-Quebec Educational Exchange Program that continues today and led the "Symons Commissions,' which laid the basis for French-language education in Ontario.

Symons gave his time to innumerable volunteer organizations over the years, including the Red Cross, Sir Sandford Fleming College, the Ontario Arts Council and the Mayor's Committee in Peterborough.

His contributions to the country were recognized by his appointment as a Companion of the Order of Canada, with 13 honorary degrees and appointment to the Order of Ontario, among other honours. He also received the Queen's Silver, Golden, and Diamond Jubilee Medals and the Canadian Centennial Medal.

From 1979 to 1983, Symons served on the UCC Board of Governors, and his family legacy at the College includes sons Ryerson '85 and Jeffrey '88, and grandson Wilson '19. It’s with great pride that we continue to steward the longstanding Symons Prize in Canadian Studies, awarded to a student in Year 7 who demonstrates a love of the subject.

Symons passed away earlier this year.
Back