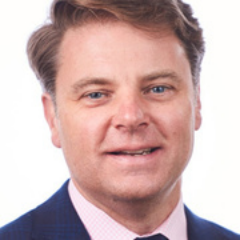 John is a member of Leaving Class of 1989. During his time at the College, John won the Lieutenant Governor Medal in 1987 and 1988 for his accomplishments. He holds a B.A. in Economics from Yale University and an M.B.A. from Stanford University Graduate School of Business (Arjay Miller Scholar). While at Yale, John successfully launched and sold a baseball hat company called J&J Lids.
John joined KKR in 2015 and leads the firm's public equity investment efforts. Previously, he was co-head of public equities at Golden Gate Capital from 2010-2015. Prior to Golden Gate, he spent fifteen years at J.H. Whitney & Co. where he devoted the first ten years to the private equity side of the business and the last five years to managing the Whitney Green River hedge fund. He started his career in the investment banking group at Morgan Stanley in New York.
John and his wife Lisa have four daughters – Haley Emily, Annie and Sophie.
Back